She is 38 years old. She is a member of the Sán Rìu minority in Thái Nguyên province, 100 km from Hà Nội. She is a single mom.

Van has known blindness since she was three years old. Stricken entirely blind in one eye by measles, and with very little vision in her other eye she explains that she doesn’t remember being able to see normally and even now has such trouble with her one eye that she feels totally blind at times. One of five children in her family, while several other members of her family were stricken with the measles she is the only one who suffered a lasting disability as a result of the illness.

Even though Van was nearly blind she was able to attend school with other children in her village until the fourth grade. As one of five children in her family, when the family could no longer support the cost of her education she had to stop going to school. During this time in her life she explains that her family treated her as if she was a burden.

When she was able to begin earning money, however, this attitude began to change. In her village, however, Van experienced considerable discrimination.

She explains that when people saw her on the street and realized that she is blind they would avoid her, in some cases seemingly because they assumed she would beg them for money. She has even been asked, “who gives you money”, the assumption being that because she is blind she would have no abilities and would be unable to earn money on her own. It is for these reasons that she avoids using the white cane, feeling that rather than providing a benefit it might “mark” her or further stigmatize her.

Van has many years’ experience as a masseur, first working in Tam Quat, or traditional Vietnamese massage shops and later forming a partnership with another blind masseur to open their own such shop. Unfortunately, the public perception of Tam Quat in Vietnam is not a good one. The Vietnamese public who typically visit such establishments do not expect to pay much, typically have low expectations and far to often visit after going drinking and arrive dirty and exhibiting poor manners. Thus it is that the more respectable segment of Vietnamese society tends to avoid such places, furthering the unsteady reputation of the business.

Hoping to establish a place of her own that could achieve a higher standard, in 2012 Van invested 10,000,000 VND (US $4231.00 in today’s money) of her hard earned money, along with an equal partner, in starting their own Tam Quat shop. To give perspective, that sum represented her entire income for about one year at the time. She and her partner soon learned, however, just how hard it is to run a small business. It required two months of hard work just to break even. But then the problems began to present themselves. When training new staff, they would no more than get to the point where they could be productive than they would leave, seeking more money elsewhere or finding the work not to their liking, often making false excuses for their departure. Paying more to attract more highly skilled and experienced therapists brought challenges of another kind. After 4 years of trying to make things work, Van and her partner called it quits.

Fortunately for Van and for Omamori, Van learned about Omamori from a friend and joined the organization, accepting the training that would allow her to earn significantly more income—indeed enough to support her and her son and allow them to be completely independent of her family’s financial support.

For Van, the only real disadvantage due to her visual impairment is that it limits her mobility. However, she feels that being impaired gives her a big advantage in treating clients because she is more sensitive in her hands than others might be and her blindness also makes focusing entirely on the clients body easier.

Van’s sole passion and greatest interest in life (other than her family) is her work as a massage therapist. Her dream is to earn enough as a therapist to be able to build a home for herself and her son 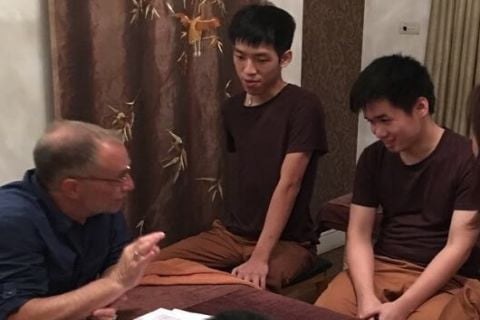